French Tacos Factory is Australia’s first and only authentic French Tacos shop. The team brings Sydney’s latest French food trend to bustling King Street in Newtown.
These tacos started a food revolution in France, and next up they’re taking on Australia. You may be wondering, what exactly are French tacos? French tacos are nothing like the beloved Mexican food you’re familiar with. Plus, it’s called a tacos, not a taco. The name is a mystery to us too.

A French tacos is made up of a tortilla, French fries, cheese, meat and cheese sauce. Some call it a love child of a kebab and a grilled cheese. This is because  the stuffed tortilla is pressed in a grill until the cheese melts to gooey perfection. French Tacos Factory brings in their cheese from France and makes their secret sauce in-house so you know it’s the best in Australia.

Bistrot Media was tasked with introducing French Tacos Factory to Sydney. Starting in December 2019 we helped take their instagram from 157 followers to 3,000+ within 4 months.
First, we created a short video to showcase these mysterious new tacos to the Australian market and used it for targeted advertising.

As we grew the company’s social media following we simultaneously launched a PR campaign. The goal of the campaign was to gain valuable media coverage and influencer marketing through pitching and outreach. To gain media and customer interest, we offered one day of free french tacos, and captured the busy day through video to use for post-campaign marketing.

The result was extremely successful, with Bistrot Media landing local news coverage worth upwards of $20,000 without additional investment or budget from the client or agency.
Our influencer marketing strategy was also widely successful. We worked with a number of local influencers who’s local reach and engagement help drive traffic and followers to French Tacos Factory’s Instagram page, as well as customers into the restaurant. Check out the videos and media coverage below. 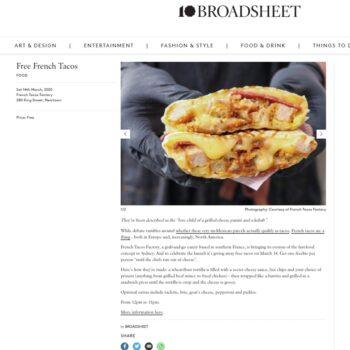 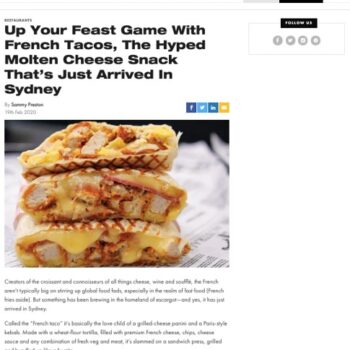 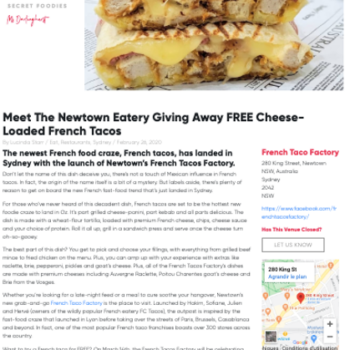 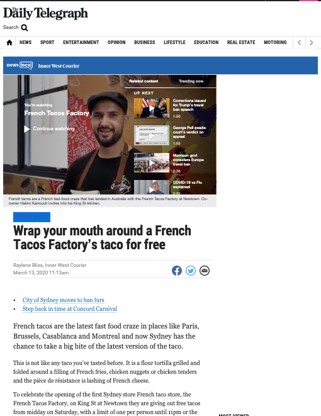 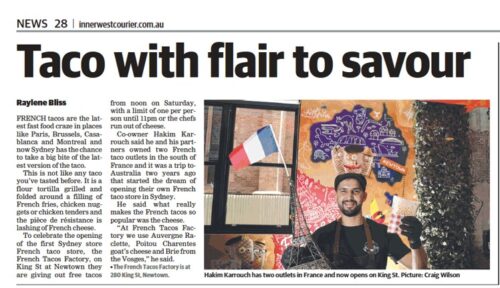 Grow your following and get noticed

If you’re looking to increase your social media following and gain valuable PR coverage, we can help.
Contact us at laura@bistrotmedia.com.